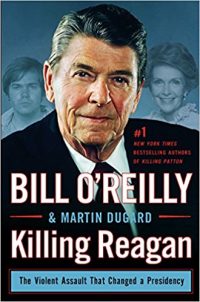 Killing Reagan – The Violent Assault That Changed a Presidency

Killing Reagan – The Violent Assault That Changed a Presidency is an excellent historical account of the Reagan Era. While the other books in this series that have been reviewed, Killing Jesus and Killing Lincoln, have been rated as suitable for middle grade up. Like Killing Patton, and Killing The Rising Sun, and Killing Kennedy,  Killing Reagan should be categorized as new adult because the book was not written for children. There is more mature content in Killing Reagan. Like Killing Kennedy there is language and content that is not appropriate for younger and more sensitive readers. Along with this, there are some graphic descriptions although less than in the WWII based books. Another aspect is the sexual innuendo and exploits of President Reagan and others surrounding him, although there is significantly less sexual content than what was in Killing Kennedy.

Killing Reagan goes into detail about the life of Ronald Reagan from his Midwestern upbringing through his film career and later political career.  O’Reilly and Dugard go into great detail about the political and social climate of the 1960s through the 1980s, specifically Reagan’s transformation from FDR-era Democrat to fiery anti-communist Republican. The rise and fall of the Soviet Union and the transition of nations behind the Iron Curtain from communism feature into the latter part of the book.

The book focuses President Reagan, Nancy Reagan, the Reagan childre, key political leaders including his friendship and political alliance with Margaret Thatcher as well as John Hinkley who attempted to assassinate Ronald Reagan to gain the attention of the actress Jodie Foster. The premise of the book is going into detail of President Reagan’s presidency and whether or not the trauma of the assassination attempt affected his mental acuity during his presidency and how it might have accelerated his battle with Alzheimer’s Disease. Robert Petkoff instead of Bill O’Reilly narrates the audio version of Killing Reagan, and I highly recommend it. He is an excellent narrator and does a good job of including the footnotes to make them fit seamlessly into the text.

There are a few, which is why I categorized Killing Reagan as New Adult. More tame than Killing Kennedy, there was some questionable content, including an incident with a young actress in Reagan’s past. There are some swear words, innuendo, coarse language, crude behavior, and discussion of extramarital affairs. While not graphic, this makes the content more mature. This book is less graphic with respect to President Reagan’s injury than what was in Killing Kennedy, Killing Patton, or Killing the Rising Sun.

3.5 Stars. Overall, Killing the Rising Sun is well-written and engaging. Like the other “Killing” books, it rates 5 stars on the content and execution. New Adult allows for a bit more mature content, but even with this caveat, there is a fair amount of coarse language, behavior, and innuendo, even more than in the WWII based books. As with the other books in the series, the historical details especially about the social and political climate of the time are the highlight of this book. My husband and I listened to the audiobook. Bill O’Reilly narrates and has an engaging voice. However, I suggest reading or listening to the book before deciding if it’s appropriate for your children, students, etc.

We have listened to all of the O’Reilly-Dugard “Killing” books, and this is the fifth in my series on these books because I think each of them offers fantastic insight into the social and political climate at the time. However, this one did not carry 5-star ratings even though the writing quality and level of detail are the same. I would not call this book family friendly due to some objectionable content cited above. There is some language and situations described that might be objectionable to some people.