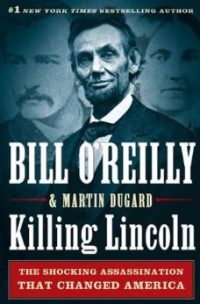 Killing Lincoln is an excellent historical account of the time surrounding the end of the Civil War. While it’s suitable for middle grade up, it should be categorized as young adult because the book was not written for children.

Killing Lincoln goes into detail about the end of the Civil War. O’Reilly and Dugard go into great detail to put Lincoln’s assassination into historical context. The best part was the details about John Wilkes Booth, his co-conspirators, and what they did before and after the assassination. Bill O’Reilly narrates the audio version of Killing Lincoln, and I highly recommend it.

Not too many. Really sensitive children might be troubled by the details of Lincoln’s injury and the broken leg John Wilkes Booth sustained. While not overly graphic, both are rather detailed. Blogger’s note: when I went to Ford’s Theater and saw the suit Lincoln wore, I nearly passed out, so I might be a bit on the squeamish side. Because of the nature of assassinations, this might preclude families from listening to the audio version or allowing sensitive readers to read this book until they can handle this aspect. There is minimal,  if any unsuitable language. There may be a couple of minor oaths and/or racial slurs in the context of quotes and correspondence.

5 Stars. Overall, Killing Lincoln is well-written and engaging. Most of all, the istorical details are the highlight of this book are fascinating. My husband and I listened to the audiobook, which I highly recommend. Bill O’Reilly narrates and has an engaging voice.

We have listened to all of the O’Reilly-Dugard “Killing” books, and this is the second in my series on these books because I think each of them offers fantastic insight into the social and political climate at the time. However, not all will carry 5-star ratings even though the writing quality and level of detail are the same. Not all are family friendly due to varying degrees of objectionable content especially in the books covering more recent events.