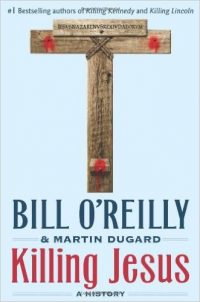 Killing Jesus is an excellent historical account of the time surrounding Jesus’s life. While not a religious book, it puts the Bible, specifically the Gospels in historical context. I’m categorizing this as young adult, but it’s suitable for middle grade up with the caveat that some parts of the crucifixion might be a bit graphic for sensitive children.

The book goes into detail about the Roman occupation of Israel, the religious and political climate of Israel, and several of the key historical figures such as Augustus Caesar, Herod, Tiberius, and Pontius Pilate. O’Reilly and Dugard go into great detail to put Jesus’s life into historical context, which helped me understand parts of the Bible even better. O’Reilly and Dugard are Catholic and while they keep this book historical, the authors hint that they believe the Bible to be true. Bill O’Reilly narrates the audio version, and I highly recommend it.

Not too many. There are parts that are a bit graphic when describing the crucifixion. This might preclude families from listening to the audio version or allowing sensitive readers to read this book until they can handle this aspect.

5 Stars. Overall, the book is well-written and engaging. I found the historical detail to be a nice supplement to reading the Bible. My husband and I listened to the audiobook, which I highly recommend. Bill O’Reilly narrates and has an engaging voice.

My husband and I have listened to all of the O’Reilly-Dugard “Killing” books, and I’m going to do a series on these books because I think each of them offers fantastic insight into the social and political climate at the time. However, not all will carry 5-star ratings even though the writing quality and level of detail are the same. Not all are family friendly due to varying degrees of objectionable content especially in the books covering more recent events.


For parents, especially those who are Christians, will appreciate the historical account of Jesus’s life, which is a different way of proving the Bible is true from a different perspective. For teachers and librarians in public or secular schools, this is not a religious text and could be a good way to introduce the history of Christianity into the classroom. The authors are Roman Catholic and at the end hint that they believe Jesus is the Messiah, but they make it clear that the book is meant to be a historical account of Israel in the years approximately 1-33 AD.