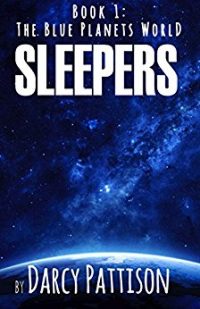 Sleepers is the first in The Blue Planets Trilogy—notice the plural in Planets.

Based on the premise that Earth is not the only planet that can sustain life as we know it, the people on Rison, another blue planet, need to evacuate because their world is ready to implode. They seek refuge on Earth and propose a workable arrangement. The Risonians have gills, as well as lungs, and are perfectly capable of living underwater. They could reside on the ocean floor while Earthlings continued on the surface of the planet. As with any public project, opinions abound, and debate is fierce.

Fourteen-year-old Jake Rose, half-human and half alien, now lives on earth with his human grandparents while his mother, who is the Risonian ambassador to Earth, works to arrive at a peaceful compromise for both parties. Jake accidentally discovers that Earth’s elite ELLIS forces are trying to sabotage Mt. Rainier in hopes an eruption can be blamed on the Risonian aliens. Although he doesn’t realize it immediately, Jake himself may hold the key to prevent ELLIS from destroying their own planet. Meanwhile, Risonians have their own darker factions, and in the midst of interplanetary tensions, a mysterious illness affects some creatures and not others.