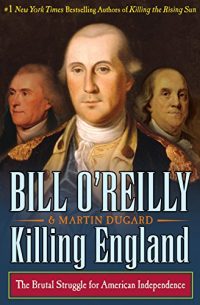 A Broad Perspective of the Era of the Revolutionary War

Killing England – The Brutal Struggle for American Independence is an excellent historical account of the Reagan Era. While the other books in this series that have been reviewed, Killing Jesus and Killing Lincoln, have been rated as suitable for middle grade up. Like Killing Patton, and Killing The Rising Sun, and Killing Kennedy,  Killing England should be categorized as new adult because the book was not written for children. There is mature content in Killing England although lacking the crude language found in Killing Reagan and Killing Kennedy. Like Killing Patton and Killing the Rising Sun there is content that is not appropriate for younger and more sensitive readers, however, there is less violence in this book. There is some sexual innuendo including allusions to homosexuality of a minor historical figure as well as adultery.

The book offered a broad view of the political climate surrounding the era of the Revolutionary War. The authors detailed the years that led up to the Revolutionary War including the French and Indian War, taxation without representation, and other factors that necessitated the Colonies to seek independence from England. The stakes were high for those who would be essentially traitors to England.

The authors also introduce the readers to various key historical figures from America and England as well as France, and Germany. As with the previous books, the biographical details of the various people are what makes these books so engaging.

As previously mentioned, there is some adult content primarily regarding adultery, homosexuality, and other sexual exploits of various figures. It might be a bit nitpicky but some details seemed to be a bit gratuitous and inserted for political correctness, entertainment, or to make the book a bit more “racy” but didn’t add to the narrative. I do appreciate that other than Benjamin Franklin, who was quite a character, none of the other Founding Fathers were besmirched.

4 Stars. Overall, Killing England is well-written and engaging. Unlike the other “Killing” books, I gave it only 4 stars on the content and execution. New Adult allows for a bit more mature content so I didn’t subtract points for this. As with the other books in the series, the historical details especially about the social and political climate of the time are the highlight of this book. However, I felt this book was not quite as engaging as the others. My husband and I listened to the audiobook. The narrator has an engaging voice. I suggest reading or listening to the book before deciding if it’s appropriate for your children, students, etc.

We have listened to all of the O’Reilly-Dugard “Killing” books and like the others offers fantastic insight into the social and political climate at the time. However, this one did not carry 5-star rating even though the writing quality and level of detail are the same, it was not quite as engaging. There are some situations described that might be objectionable to some people.  In that regard, the content is on par with Killing Patton and Killing the Rising Sun.

2 Replies to “Killing England – The Brutal Struggle for American Independence”