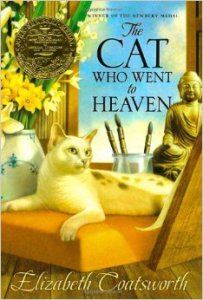 Knowing this story won the Newbery Medal in 1931, I expected fantastic

writing. Looking at the title, I assumed it was a book of faith. I was mostly correct. Yes, The Cat who went to Heaven is magnificently written, a wonderful read-aloud giving your child a full picture of the setting. Yes, it’s a book about faith—but not the Christian faith. Its themes are subtle, so it’s a book best read by children ten and up.
Look past the synopsis to see what I find worthwhile about reading a book centered on Buddhism.

The story centers on a talented, poverty-stricken artist who has been commissioned to paint the scene of Buddha’s death for the local temple. Such a painting includes all the animals lined up to give honor to this master teacher. Cats, however, are never included. They are traditionally associated with demons. To the artist’s dismay, his faithful housekeeper brings home a cat, but this cat seems different. He observes its gentleness with other living creatures and with his art, and he names her Good Fortune.
As he adds more and more animals to his paintings, the cat seems sadder and sadder, which makes him feel guilty for not putting her into the picture. She’s such a sweet cat! Finally, he gives in to his conscience. Even if the priest refuses to pay him, he adds a painting of his cat as the last animal in line to honor Buddha. What happens next would give away the ending!

Pros
1. With supervision, The Cat who went to Heaven makes for an excellent education about Buddhist history and myths, and it creates plenty of room for discussion on how Buddhist beliefs compare to the Christian faith. For example, it is filled with side stories of Buddhist myth. While each story is an example of another incarnation of Buddha, in every instance, the story involves Christlike self-sacrifice.
2. The entire message of the book teaches compassion, kindness, and mercy.
3. Told like a fairytale, the prose is almost poetic in its beauty.
4. Lynd Ward’s illustrations are exquisite.

Cons
1. Because it features a different religion, Christian parents may feel wary reading a book that promotes a faith other than their own.

Discussion Questions
1. The artist would think about the stories he’d heard about Buddha while he painted his masterpiece. How are those stories like the stories you know about Jesus?
2. What is the biggest difference between Buddha and Jesus? Why is that important?
3. How was the painting different at the end of the story? What do you think that means?

Conclusion
Elizabeth Coatsworth (1893-1986), a product of Ivy League colleges of Vassar and Columbia, traveled to the Philippines, Indonesia, and China throughout her twenties. Her knowledge of Buddhism and the man who initiated its teachings far exceeds mine. Believed to have lived in the fifth century B.C, Siddhartha gave up his status as a Hindu prince, lived an impoverished life, taught others to show mercy to the unfortunate, and to display kindness toward all. We might call him a secular humanist by today’s standards since he gave more credit to the possibilities of goodness in man than he did to any of the Hindu gods. If even a portion of what is known of Siddhartha Gautama is true, I can’t help but wonder if he would have embraced Christianity, for surely, he would have admired Jesus.
The blessing of sacrificing self for the sake of others is central to this story. It’s worth your time.