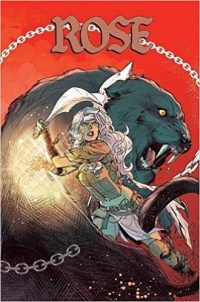 Rose, a Young Adult graphic novel written by Meredith Finch and illustrated by Ig Guara, is the first book in a new fantasy series.

Being both an illustrator and a writer, I was enticed to finally review a graphic novel. I wasn’t disappointed, however, I admit, the style took some getting used to.

Rose survives a decimating attack on her village by a villainous sorcerer, Drucilla, who has sent her army to rid her kingdom of rebels and opposing magic. Rose’s mother is one of the victims in the massacre. This event is the catalyst that propels Rose on a mission to avenge her mother and her village.

Rebels halt the impulsive and inexperienced Rose, and take her into their care. Rose has always toyed with her magical abilities, but when the rebels discover her powers, they are sure that she is the one to become the legendary Guardian who leads their fight against Drucilla. But Rose has serious doubts that she is one of the famous Guardians who team up with Khats, enormous and powerful feline warriors who bond telepathically with their human partners.

The rest of the story centres on the emergence of Rose’s magical powers and her search for Thorne, her Khat. Drucilla and her army race to squash Rose’s and the rebels’ efforts to oppose her.

Meredith Finch is a well-known writer (Wonder Woman, Little Mermaid) and Ig Guara a fan favourite artist (Batman: Arkham Knight, Blue Beetle, The Ravagers). So I was looking forward to a good romp with this new series. Overall, the experience was very positive and I would consider reading more. But I’m used to reading books with a solid beginning, middle and end. I didn’t appreciate investing the time to read, then being denied a more satisfying ending. I will definitely look for more from Ig Guara, and Triona Farrell!