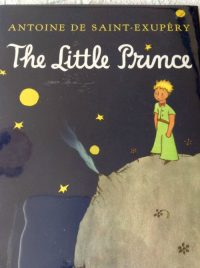 Published in 1943, The Little Prince is still in print today. Why? Because its characters are ageless.

The Little Prince leaves his tiny planet and explores several other planets, including Earth, and it is on Earth where most of the story takes place. Told from the point-of-view of a pilot stranded in the desert, he relates his tale of meeting this strange little prince who becomes his companion as he struggles to fix his plane and return to civilization.

Doesn’t sound like much, but listen to what the Little Prince has to say. “Anything essential is invisible to the eyes.” His statement reminds me of the words from the author of Hebrews: “Faith is the substance of things hoped for, the evidence of things not seen. In natural conversations, the Little Prince is full of deep wisdom, which reminds me of Jesus’s words, “Let the little children come to me, for of such is the kingdom of heaven.” Thus, it is far more than a cute little story about a cute little prince.

Saint-Exupéry zeroes in on what is important in life, and children have no problems getting to the heart of a matter (see my Pinocchio post from a while back).

The author also pokes fun at adults’ eccentricities, always returning to the premise that the soul of an innocent child sees Truth.

I had a hard time getting connected to the story. By the end, I was fascinated, bit it took time, and time is what most readers in today’s world refuse to give. Not only does the story lack shoot-‘em-up action (which isn’t quite true at the climax), it’s difficult to gauge the author’s intent among the seeming disparate stories of the minor characters as each is introduced. Maybe I’ve lost my child’s sense of wonder—I’ll see what my grandchildren think and report back.

Because of my own reactions to this story, I don’t believe it’s a book meant for the classroom. It seems “sacredly family.” A parent can ask a dozen questions per page—there are so many possible avenues to follow, which is why it’s a classic and still available almost seventy-five years later.

Let Mom and Dad direct any discussions as they see fit.

The Little Prince was published in the middle of World War II. Antoine de Saint-Exupéry was a pilot for the French resistance. His plane went down during a reconnaissance mission in 1944. I wonder what other jewels he might have created that this world will never read.