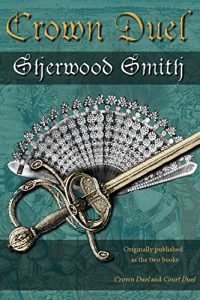 Crown Duel by Sherwood Smith is a Young Adult adventure fantasy suitable for ages 14 and up. A Stranger to Command is the prequel to this two-part novel.

Meliara Astiar and her brother Branaric promise their dying father to carry on his vendetta against the king. When he dies, they rally their people to make war. However, when Meliara becomes the prisoner of the mysterious Marquis of Shevraeth, she learns better than to judge by appearances.

Those who read A Stranger to Command will cheer at Vidanric's part in this complicated tale.

Sherwood Smith’s world building is first rate. She has created a large universe made up of many fictional countries and an intricate magical system.

The main character, Meliara, undergoes a transformation from barefoot countess to accomplished courtier. Raised in ignorance by a rather negligent father, she begins a journey of self-improvement that is satisfying to the reader.

This novel will appeal to young adults, regardless of gender.

Smith knows how to provide a complicated plot with plenty of political intrigue, magic, and conflict. Here, we return to Vidanric's home country with its rotten king and cowardly court.

It is fascinating to see Vidanric's rise to the top after reading his coming-of-age story in the prequel.

Not every book Sherwood Smith writes is suitable for this age group, but this pair of novels can be characterized as clean reads.

Meliara is stubborn and quick to anger, so much so that I wanted her to snap out of it long before she does. Her motives are good, though, and she is repentant when she makes errors.

This is two books in one; therefore, it went on a bit too long for my taste. However, I wasn't tempted to put it down.

This book ties up loose ends and provides a satisfying ending for both Meliara and Vidanric. Recommended.

Don't Miss a Single PostFollow
We use cookies to ensure that we give you the best experience on our website. If you continue to use this site we will assume that you are happy with it.Got It!Privacy policy