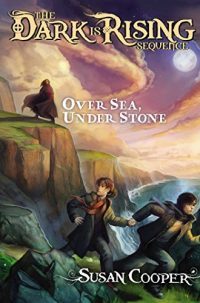 Over Sea, Under Stone by Susan Cooper is a  middle grade fantasy novel and the first of five in The Dark Is Rising series. It features the Drew children: Simone, Jane, and Barney vacationing with their parents in the fictional village of Trewissick.

The  children find an old manuscript with a map of the Cornwall coast in the ttic of the mansion they’re renting for the summer. When Barney discovers the map is related to King Arthur, they turn to their Great-uncle Merry. He confirms that the map is a reproduction of a much older map to an ancient relic of Britain, the children decide  to withhold the information from the adults and set themselves to treasure hunting. Merry does warn the children that there adults looking for the artifact, especially and organization called The Dark. Soon the summer activity turns dangerous as they are pursued by agents of The Dark, bent on possessing the relic for themselves.

The book will be enjoyed by boys and girls since the protagonists are a sister and her brothers. The book isn’t spooky, but it is thrilling and has a lot of action that utilizes the supernatural as the backdrop of story.

Susan Cooper is a wonderful writer and took advantage of all the English folklore from the Cornwall region and uses it as a backdrop for all five  books. Of all the books, Over Sea, Under Stone is probably the weakest of the stories, but it was also the first of the series. This means that if you like book one, the next four only get better.  If you don’t like book one, try the next one because it gets better.

The series is a fantasy series and will get darker as the books progress on, though in defense of Ms. Cooper, you will never find her books without hope or dreary. Some children might not enjoy the darker aspects of the story.

While the whole series takes advantage of the Arthur legend, the first book utilizes the Holy Grail legend as a backdrop.  While I don’t believe they are antithetical to Christian, or any other belief system (with the exception of Atheism), the Arthur legend does run parallel with Christian beliefs: so be warned, or encouraged.

Susan Cooper is the reason I fell in love with reading fantasy as an eight year-old. Though I didn’t start with book one in the series, I still found this book fun to read. Two of her books in the series won Newberry Awards, which in the sixties and seventies, was unheard of because of the general disdain for fantasy.  Having said that, her work has continued to win acclaim and readers across the genres, which speaks volumes to the quality of her writing.