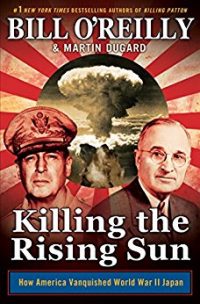 Killing The Rising Sun is an excellent historical account of the Pacific theatre during WWII. While the other books in this series that have been reviewed, Killing Jesus and Killing Lincoln, have been rated as suitable for middle grade up. Like Killing Patton, Killing The Rising Sun should categorized as new adult because the book was not written for children.There is a bit more mature content in Killing the Rising Sun. There is some language and content that is not appropriate for younger and more sensitive readers. Along with this, the violence and graphic descriptions, especially with respect to the aftermath of Hiroshima and Nagasaki.

Killing the Rising Sun goes into detail about the end of WWII, particularly the Pacific theatre. General Douglas MacArthur, President Truman, the end of WWII, specifically the sinking of the Indianapolis, the siege on Okinawa, and dropping the atomic bombs on Hiroshima and Nagasaki are the focus. O’Reilly and Dugard go into great detail to put General Douglas MacArthur’s military career, particularly his role in the Pacific theatre.

The book focuses not only on General MacArthur but also President Truman and the difficult decision to drop the atomic bomb. The premise of the book is that the decision to drop the atomic bomb on Japan wasn’t an easy one but considered the option that would save the most lives of both the Allied soldiers and Japanese civilians. Robert Petkoff instead of Bill O’Reilly narrates the audio version of Killing the Rising Sun, and I highly recommend it. He is an excellent narrator and does a good job of including the footnotes to make them fit seamlessly into the text.

There are a few, which is why I categorized Killing the Rising Sun as New Adult. There are several colorful characters. With this there are some swear words, innuendo, coarse language, and discussion of extramarital affairs are discussed. While not graphic, this makes the content more mature. This is a book set during a long and bloody war that might bother some sensitive readers or listeners. Even compared to Killing Patton, Killing the Rising Sun is even more graphic. The damage from the atomic bombs is described. While not gratuitous, it doesn’t shy away from description. The same goes for the sinking of the Indianapolis and the siege of Okinawa.

4 Stars. Overall, Killing the Rising Sun is well-written and engaging. Like Killing Jesus and Killing Lincoln, the book rates 5 stars on the content and execution. New Adult allows for a bit more mature content, but even with this caveat, there is some coarse language and innuendo, even more than in Killing Patton. As with the other books in the series, the historical details are the highlight of this book. My husband and I listened to the audiobook. Robert Petkoff narrates and has an engaging voice. However, I suggest reading or listening to the book before deciding if it’s appropriate for your children, students, etc.

We have listened to all of the O’Reilly-Dugard “Killing” books, and this is the fourth in my series on these books because I think each of them offers fantastic insight into the social and political climate at the time. However, not all will carry 5-star ratings even though the writing quality and level of detail are the same. This is the first one that I would not call entirely family friendly due to some objectionable content cited above. There is some language that might be objectionable to some people. Battles, extramarital affairs, and the brutality of war are discussed. There is some innuendo/coarse language mostly in the context of quotes and correspondence.