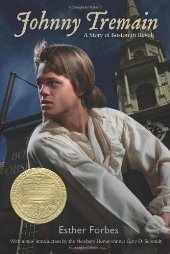 Until last week, I had never read Johnny Tremain. Shame on me! And shame on me that after the first thirty pages, I was ready to recommend only the most patient of readers should stick with the book. Sure, it was a Newbery Medal Winner. Of 1943. Language has changed and Esther Forbes’s habit of explaining the obvious to her readers was annoying.

HOWEVER, I urge you to stick with it! The deeper I progressed into the story, the more I could see why it was a medal winner, and I didn’t want to stop reading. Esther Forbes was an avid historian of the Revolutionary War. She was particularly interested in the goings-on of the Sons of Liberty in Boston leading up to Paul Revere’s famous ride and the Shot Heard Round the World. She then took what she had learned and used a small incident, the boy who took the message to the friend who would hang the lanterns in the North-Church-tower (“one if by land and two if by sea”), and created a children’s novel in order to bring Revolutionary times to life for every generation.

Not only are we reminded of historical events, but Forbes lets us peek into the real, and often flawed, lives of many of the leaders of the Revolution. She depicts the British as real men,  not monsters. They tried to keep the peace by allowing rebels freedom of movement in the hopes that war could be averted, for after all, the Revolution was all about Englishman vs. Englishman. A civil war.

As I read, I could see the book was well researched. If you obtain a copy with Gary D. Schmidt’s introduction, you will see just how well researched it was. Study it! Schmidt gives fascinating insights into the author, her scholastic abilities, and her message. 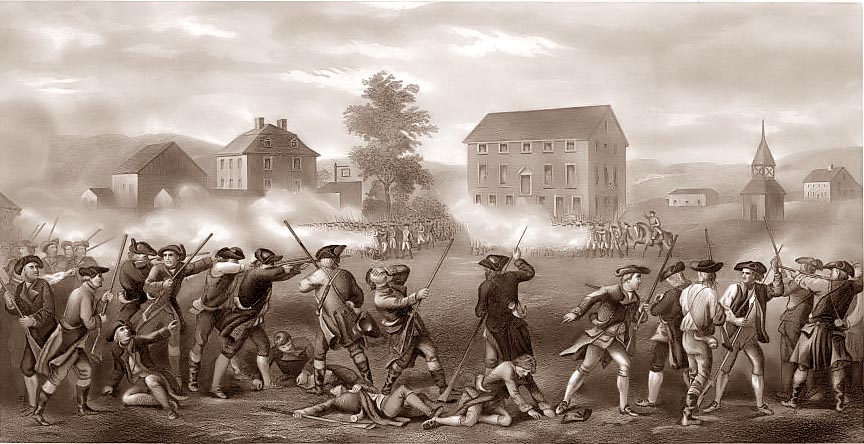 Johnny Tremain is apprenticed to a silversmith. When an accident to his hand prevents him from following his dream to surpass the skills of the famed Paul Revere, he searches for whatever work the maimed hand will allow him to do. Thus, he becomes involved with the Sons of Liberty, a messenger boy who shares what he learns listening to British soldiers in the taverns of Boston.

I can think of two that reflect worse on the reader than on the author.

These can range from simple discussion of historical events to soul-searching questions of right and wrong. I’ll mention a couple that came to mind regarding the latter.

Shortly before the confrontation at Lexington, James Otis made an informal speech to the Sons of Liberty speaking on the eternal values liberty represented. He claimed it wasn’t worth it to fight for money or for representation in the British Parliament. But it was worth it to fight for the right of a man to “stand up.” This was the author’s message as men stood up for freedom in World War II. The same message applies as men stood up for freedom in Korea, in Vietnam, in Kuwait, and they stand in Iraq and in Afghanistan today. It’s why the world fights ISIS and its ilk.

I’ll finish with a Bible verse, perhaps taken slightly out of context, but its meaning applies. Because there are principalities and powers of the air who direct more than we may be aware of, God instructs us to put on His armor and face the enemy. Ephesians 6:13 sums up the idea in one verse: “And when you have done all, STAND.” This is the message of Johnny Tremain. Men of ideals, not all of them perfect ideals, stood for what they believed was right and true. When they had done all that they knew in dealing peaceably with King George III, they stood and held their ground against tyranny. Johnny Tremain teaches our children to do the same.