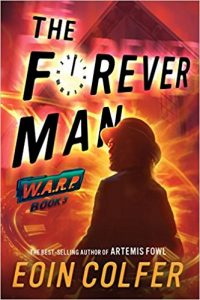 The Forever Man is book #3 in the middle grade fantasy Warp Trilogy written by well-known Eoin Colfer, author of the Artemis Fowl series.

Riley, a fifteen-year-old, lives in Victorian London as a magician. In book #1, he defeated his murderous master Albert Garrick, with the help of Chevie Savano, a seventeen-year-old FBI agent who travelled back in a time pod.

Garrick, who had been banished in a wormhole for two hundred years, vowed to return and seek revenge on Riley. Garrick returns in book #3 with wormhole caused mutations that enable him to seem immortal.

Garrick lures Riley (and Chevie) to a prison under false pretences to see Riley’s long-lost brother. After the three are swept inadvertently into another wormhole, they end up in a puritan village in 1649. Due to the wormhole spitting out many horrific mutations to the village in the past, the villagers are fearful and Garrick is known by previous visits, as the witch hunter and protector.

Chevie is caught and is to be burned at the stake for being a witch, but Riley breaks free from his entrapment. With the help of a few new characters, Pointer (an FBI mutant who is a dog), Fairbrother Isles (another FBI agent), and the ghost of Professor Smart (the scientist who created the wormhole), Riley devises a plan to save Chevie. But they also must save humanity before Garrick destroys the wormhole.

I quite enjoyed this final book, and I feel of the three, it was the best.  I still enjoyed the Artemis Fowl series better, but this was a close second. I would recommend this book to anyone who loves Eoin Colfer, but I would caution that it is a bit more dark and technical to be regarded as MG.