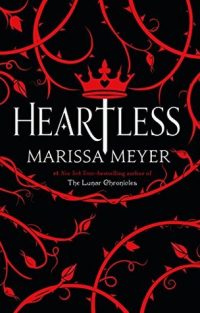 In Heartless, Catherine just wants to open a bakery with her best friend. But the King of Hearts wants her as his wife. How can she keep hold of her dream when her parents are convinced that this marriage is best for her and the kingdom?

When she meets Jest, the very irreverant and handsome court jester, she is drawn to him like a magnet. She falls in love and realizes that she would sacrifice everything to be with him.

However, in a land of magic of madness fate might have other ideas.

I loved Heartless!!! The rich details really drew me into this story. I have to admit that Alice in Wonderland is not one of my favourite stories but Meyers gives it new life. There are many twists and turns in this story where we all know the ending. It’s also fun to find the “origins” of many of the things that are in the original Lewis Carroll classic.