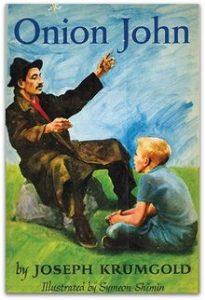 free to roam the countryside surrounding his small town of Serenity the whole day long, and his parents have no trouble with him befriending the village’s odd-man character, Onion John.

Today’s generation of children will read Onion John and consider it a fairytale, yet when the novel was written in 1959, it was contemporary realistic fiction. It’s a sweet story of contrasts—growing up and meeting the future versus looking back and accepting the past. Andy and his father both learn wisdom as they try to help Onion John. For Andy, that means being Onion John’s best friend, and since he’s the only person in his community who can understand John’s garbled speech, he also becomes John’s interpreter. For Mr. Rusch, it means turning Onion John  into a good-deed project and organizing the town to help build the “homeless” man a proper house. Except Onion John doesn’t want a new house, and he doesn’t need an interpreter to thrive in the world he has established for himself.

I grew up in communities like Serenity. Why didn’t I read this book as a child? It has such a beautiful ending. My only excuse: the main character is a boy. I only liked girl stories.

If you want a taste of mid-twentieth century Americana combined with a wise attitude toward life, read this book. As a Newbery Medal winner, many libraries still carry it, and you can find it on Amazon.