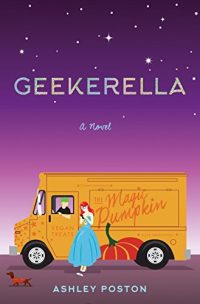 A Cinderella retelling for fans of geek culture. Cinderella has always been one of my favorite fairy tales. I remember seeing it in the theatre as a little girl. The 2015 version ranks as one of my top three all-time favorite movies. Geekerella is a retelling set in the world of science fiction fandoms.

I’m also a geek or rather GEKE. Literally, those are my initials, so I absolutely, no questions asked, had to read (or in this case listen to) Geekerella.

Danielle (Elle) is an orphan being raised by her stepmother and twin step sisters. They’re country club popular girls and pretty. Their summers are filled with tennis lessons and lunches at the club. Elle works in a vegan food truck painted like a giant pumpking with the eccentric Sage and writes a blog about the science fiction cult hit Starfield, a show that connects Elle to her late parents.

Darien is best known for his hot body and the character he plays on a teen soap opera. But under his buff exterior beats the heart of a geek who escapes his overbearing father, a fixture among the Hollywood elite and his absentee socialite mother.

Darien is cast as Federation Prince Carmindor in the Starfield reboot. On a morning show, he throws the answer to a trivia question so he can be dunked in a dunk tank and rip off his shirt. He is angry about how he’s being portrayed and refuses to do a “meet and greet” at an upcoming convention. In anger, he texts the venue coordinator, Elle’s late father. Elle, who has inherited her dad’s phone receives his texts.

Elle and Darien survive their very different summers through an ongoing relationship through texts focused around their mutual love of Starfield with neither one knowing the other’s identity. The story unwinds with classic Cinderella elements, in this case destroyed cosplay costumes and a leaky attic. But add the drama of a Hollywood set and gives nearly equal time to the prince’s story, not unlike the 2015 movie that shows more of Kit’s life along with Ella’s.

Geekerella is a humorous retelling and a light YA read I’d recommend to teens who love fairy tale retellings and/or geek culture. The book was written in 2017 and is on point with the current culture. However, I think this book will be dated fairly soon. I give the book 3.7 stars. It’s not quite an awesome 4 or 5 star book but is one I’d consider checking out of the library again to listen to. What can I say, I’m a sucker for Cinderella stories and geeky heroes and heroines.