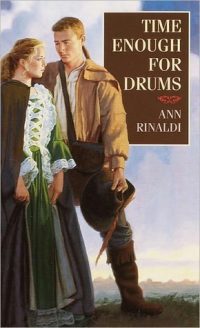 Time Enough for Drums by Ann Rinaldi is a thought-provoking Young Adult book most suited to eighth grade and up.  The setting is the American Revolution as experienced by sixteen-year-old Jemima Emerson.

One of my all-time favorite books

Jemima Emerson lives in Trenton, New Jersey, and her family experiences all of the conflict of the War for Independence. Her family is split; Jemima’s older sister is married to a British officer, but her oldest brother is an officer in Washington’s army. Her grandfathers are on opposite sides of the conflict as well. Even Jemima’s despised tutor, John Reid, is a Tory. But, as she will learn, not everyone is who they seem to be.

Her family pays a high price for choosing sides, and Jemima has to grow up fast against the backdrop of war.

Time Enough for Drums is a story I have read multiple times because I want to experience it again and again, like a favorite movie. The characters get under your skin, and their victories and defeats come back to haunt you. In short, this is not a book you can read and forget; it is a book that makes you think about what you believe. I can think of no higher praise.