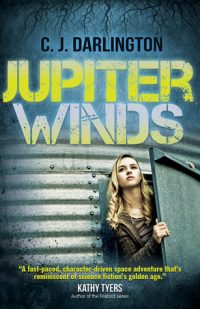 Jupiter Winds by C. J. Darlington is a Young Adult book that is suited to grades 6 and up.  The story is a mixture of science fiction and dystopian.

Grey and her younger sister, Rin,  are surviving in the absence of their parents in a very hostile location on Earth. They make due and get by with the help of their elderly friend, Mrs. March. Running contraband to buy supplies, every day is a risk, and when government forces close in, the sisters are separated.

Jupiter Winds would qualify as a Space Western since it has a fun plot and ignores science as we know it. This particular story is a clean read, completely suitable for middle grade readers and above.

To be blunt, this novel is full of bad science. I could overlook this shortcoming if the story had been written before the space age, but these days, even young teens will have to suspend disbelief in a big way because Jupiter Winds revolves around the idea that we’ve misjudged Jupiter by writing it off as uninhabitable.

Jupiter is mostly hydrogen and helium under intense pressure. No spacecraft we could fashion on Earth would be able to withstand the gravitational pressure of the massive planet. That goes double for the frail human frame.

But in this story, humans don’t even require spacesuits to walk on the planet’s colorful sands or breathe its poisonous atmosphere. There are trees and animals native to the planet. The weather’s fine if you overlook the sudden onset of windstorms.

Another key point in the plot hinges on the idea that humans have discovered a shortcut to reach Jupiter in under a week. The very sketchy descriptions of the spaceships evoke crafts of the silent film era combined with silos like those used to house intercontinental ballistic missiles (ICBMs).

I gave this book 3 stars on Goodreads for its lack of scientific realism and because there are no half stars on Goodreads to ease the pain. However, 3 stars seems too severe if you are simply looking for a good time. For keeping me entertained, I would give Jupiter Winds 4 stars, so I have settled for 3.7 which you may round up to 4 stars if you like. Read it if you love Space Westerns. Avoid it if you’re a dedicated fan of hard science fiction.