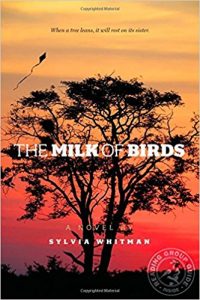 When a tree leans, it will rest on its sister.

Fifteen-year-old NAWRA from Darfur lives in a camp for refugees displaced by the Janjaweed’s trail of murder and destruction. She can’t read or write but when an organization called “Save the Girls” pairs her with a girl in the states, she gets her best friend to be her scribe her thoughts and experiences.

K.C., an American teen in Virginia hates reading and writing. But when she receives letters  from Nawra she is forced to look beyond her own struggles.

Through the letters the girls form a bond that bridges two continents. Both girls find that strength is found in numbers and together they can fight for a brighter future.

I was instantly attracted by the cover and the saying on the front cover of this book. It is a book full of rich details about Darfur. It did keep my turning the page although I often found K.C. to be not as full of a character compared to Nawra. If you have teens who want to know more about world affairs and how they can help this is a great book.

There are reading group questions inside. 🙂