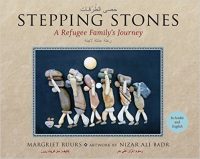 Stepping Stones, A Refugee Family’s Journey is a story from a Syrian girl’s perspective about having to flee her country.

Rama loved playing with her dolls and her brother Sami, going to school, drinking tea with her neighbours and buying produce at the market. Life was peaceful and fun in her Syrian village. But her grandfather, Jedo, complained that they were not free to sing their favourite songs, or dance, or to pray the prayers of their choice. Then a few neighbours started to leave. When bombs began to fall near her village, the birds didn’t sing, and there was not enough to eat. More people left, fellow villagers in search of a place where they could be safe from bombs and enjoy life. The day came when Jedo told her family they had to pack up and join the rest leaving their village, their pets, and their life in Syria. They walked for a long time, carrying blankets, food and clothing.

They finally came to the sea and boarded a boat with many others. The ocean tossed and punished their boat and some people didn’t make it. Prayers were said for those they had to leave at sea. When they landed, again they walked, but this time they walked without the fear of war. New friends helped them and gave them food and clothes, and a doll for Rama. She and her family were called the lucky ones, the ones with hopes and dreams of peace.

As an artist, I was pulled into the story because of the sincere understated style and the expressive and sensitively portrayed figures. The fact that the illustrator is also a Syrian who used local materials in such an ingenious way was a bonus. I always appreciate artists who think and work outside of the box, and the illustrations in this book showed amazing imagination. I also loved the story from a child’s perspective. Being a parent, her plight hit home. Their predicament will also help children see how lucky they are to live where they live.