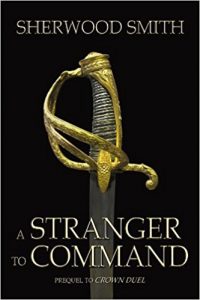 A Stranger to Command by Sherwood Smith is a Young Adult adventure fantasy suitable for ages 14 and up.

Fifteen-year-old Vidanric Renselaeus, Marquis of Shevraeth is in danger. Too many of his peers have died in “accidents,” and his parents are desperate to keep him out of the king’s way. They send him to the far-off land of Marloven Hess to train in that country’s military academy.

When Vidanric arrives at the academy, he sticks out. His long hair, fancy clothes, courtly manners, and poor grasp of the language mark him as an easy target. “Shevraeth,” as his classmates call him, must rise above the hardships to succeed in this strange environment.

Meanwhile, a much larger drama is unfolding. The host kingdom of Marloven Hess is preparing for an invasion by mysterious, magical forces. Shevraeth’s home country is mired in internal politics that put everyone he loves in danger.

A Stranger to Command is the prequel to Crown Duel. Both books are part of a much larger set of books set in this world.

Sherwood Smith’s world building is first rate. She has created a large universe made up of many fictional countries and an intricate magical system.

This story has a very sympathetic main character, and this is the beginning of his transition to adulthood.

This novel will appeal to young adults, regardless of gender.

Smith knows how to provide a complicated plot with plenty of political intrigue, magic, and conflict.

The main character grapples with several moral questions; his decisions are admirable but not perfect.

Not every book Sherwood Smith writes is suitable for this age group, but this pair of novels can be characterized as clean reads.

The military academy setting has an intrinsic level of violence. The boys and girls are training for conflict, and sometimes they settle disputes among themselves through violence. None of the violence is graphic.

One boy takes a caning for something that was not his fault. His punishment serves as a point of shame for everyone else in the academy.

I love this book. I've read it several times, and even though the omniscient point of view bugs me, I find that Ms. Smith handles it very well. Highly recommended.

Don't Miss a Single PostFollow
We use cookies to ensure that we give you the best experience on our website. If you continue to use this site we will assume that you are happy with it.Got It!Privacy policy