Little Britches: Father and I Were Ranchers is not only a true coming-of-age story set in the early 1900s, but it also records old, satisfying values and codes of conduct that made the USA the strong nation it became. In Little Britches, most people made good neighbors, and a man’s word was his bond.  Sadly, many of those values and codes of conduct have been lost in our country today. Reading Little Britches with our families will help us instill these virtues in our children and grandchildren, and will give us many opportunities for discussing them and impressing them upon a new generation.

Respect for God is a value that runs deep in this story. Although the Moody family didn’t attend church often, they prayed together at meals and learned the importance of truth and honesty. Mrs. Moody also had Bible lessons with her children on Sunday. The children respected and obeyed their parents, although Ralph had problems with obedience. The parents loved, cared for, and trained their children to become useful and honorable adults. One of the high points for me was when Mr. Moody talked with Ralph about his “character house” and how a he could either build it or tear it down.

Respect for one another is clearly portrayed. It was most often shown through action.  The family helped one another, and took care of one another in crises. They spent a lot of time together, learning self-discipline while they worked, cooked, talked, read, and performed plays.

I loved the way that Mr. Moody and Ralph discussed big issues while they milked the cows. I could see the lamp-lit stalls, could hear the milk “singing into the buckets,” and feel the warmth of their mutual friendship, respect, and love for one another.

One instance of Mr. Moody’s love is shown when, during a hurricane, he tied his family together with rope and had them crawl toward a gully for shelter. The mother’s love is seen in her distress when the children were hurt and when they learned “words they’d never known before” at a community gathering. Grace, Ralph’s older sister, might have had a sharp tongue, but she willingly bent over so Ralph could use her back as a step from which he could mount his horse.

To me, one of the most poignant scenes was when, in a crisis, Charles, the un-demonstrative father, comforted his wife by holding her, talking soothingly to her, and patting her cheek.

Respect for neighbors is also a recurring theme. The Moody family didn’t expect their neighbors to help them, but they graciously accepted a bucket of milk a day from their neighbor, Fred Aultland, until they could buy their own cow. Charles and Ralph also worked for Fred, and Charles trained Ralph to give an employer full value for his pay—and then some. Through Charles’ ingenuity, working during the noon hour, he refitted Fred Aultland’s hay stacker so they could dump a load of hay wherever they wanted it rather than in only one spot. This meant that Fred needed just one man to spread hay on top of the stack instead of three.

All the ranches irrigated their crops with canal water flowing through ditches to water their crops. At one point, to prevent a gunfight over each ranch’s water rights, Charles invented a water gauge which helped him and his neighbors win an eventual court case.

Respect for the law is also a core value in Little Britches. Ralph once caught a pheasant in his trap.  Since the law said that pheasants were protected, Charles insisted that Ralph ride alone into town, find the sheriff, and show him the pheasant he had caught.

In only one incident did Charles take the law into his own hands, literally. It happened during the night after Ralph had been in trouble at school. The male teacher had given him a whipping with a homemade whip, lashing the split leather thongs repeatedly over the knobs on Ralph’s ribs that were still healing from being broken.  The next morning, Ralph noticed his father’s hands were bruised and swollen, and the teacher came to school with a black eye.

When Ralph was not yet twelve years old, he took on a man’s responsibilities during the family’s greatest crisis. His mother became very ill and had a long stay in the in-patient surgery at the local doctor’s. As soon as she arrived home, while the nurse was still helping her settle in, Ralph harnessed the horse to the spring wagon and collected the children from their neighbor’s homes.

All in all, Little Britches is not merely a record of life at the turn of the twentieth century. It is also an accurate record of a way of life that has been lost. This good, hardworking family contributed to their community, didn’t expecting much in return, and loved God, each other, and their neighbors.  It’s a great book for a family to read and discuss together. 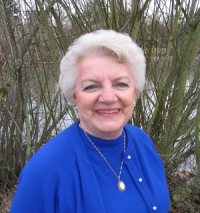 Sylvia Stewart grew up in the (then) Belgian Congo. She spent 21 years as an Assemblies of God missionary in Malawi, East Africa, with her husband, Duane. While there, she taught some writing workshops, which are now bearing fruit. She started writing Kondi’s Quest hoping to weave a story for the children of Malawi.

In 1992 they were asked to go to Ethiopia to found a Bible College. They spent 11 years in Ethiopia doing mostly Bible College ministry. She taught college-level English to students who had never taken a grammar class before.

Sylvia is the mother of four children, who grew up in Africa. Her eleven grandchildren are the delight of her life.