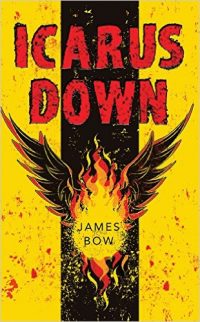 Icarus Down by James Bow is a YA Sci/fi that takes the reader on a fast-paced journey to a planet far from Earth. Sixteen-year-old Simon Doud lives in Iapyx, one of thirteen cities suspended down deep chasms. The sun on the diamond lands above can kill a human in less than five minutes. Below the cities in the fog-shrouded jungle, much feared tick tock monsters live.

All Simon wants initially is to be is a pilot of the battery-operated ornithopters, their only means of travel. But during his first flight, accompanied by his brother, a horrible accident happens. Simon is badly burned and his brother is killed.

After his lengthy rehab, Simon becomes aware of a conspiracy to mask a dark history of the human colonies. With the secret organization ‘Grounders’, Simon tries to discover the truth. This sets off a cataclysm of events that eventually causes their whole city to break away from its tethers and plunge into the forest, killing thousands of city dwellers.

Simon survives, barely, with the help of a young human female, Eliza, who speaks the alien ‘tick tock’ language. Over months in the jungle, they get to know each other, and learn each other’s language. She becomes his only friend and companion and together in the forest, they discover the truth about the horrifying connection between the aliens and the humans.