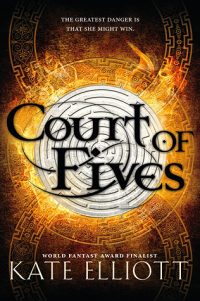 Print
Our Score
The Court of Fives is the first in a YA fantasy trilogy. The worldbuilding is reminiscent of Ancient Egypt and the Roman Empire.

On the Fives court, everyone is equal.

And everyone is dangerous.

Jessamy’s life is a balance between acting like an upper-class Patron and dreaming of the freedom of the Commoners. But away from her family, she can be whomever she wants when she sneaks out to train for the Fives, an intricate, multilevel athletic competition that offers a chance for glory to the kingdom’s best competitors.

Then Jes meets Kalliarkos, and an improbable friendship between the two Fives competitors—one of mixed race and the other a Patron boy—causes heads to turn. When Kal’s powerful, scheming uncle tears Jes’s family apart, she’ll have to test her new friend’s loyalty and risk the vengeance of a royal clan to save her mother and sisters from certain death.

In this imaginative escape into an enthralling new world, World Fantasy Award finalist Kate Elliott’s first young adult novel weaves an epic story of a girl struggling to do what she loves in a society suffocated by rules of class and privilege.

I enjoyed the series. In fact, two of the three books I bought in hardback which is unusual for me. ($$$) The political intrigue and the fact I couldn’t necessarily predict what would happen next made me devour the stories.

One Reply to “Court of Fives by Kate Elliot”