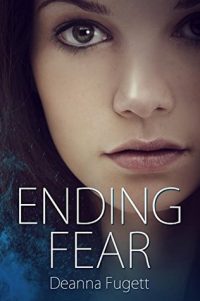 Ending Fear by Deanna Fugett is a well-written dystopian\science fiction novel for middle grade set in a world of “haves” and “have nots.” It was recently published by Love2ReadLove2Write Publishing (L2L2)  on September 23.

Fourteen-year-old Fear learns she was a parachute baby, dumped over the edge of the Gliding Lands as an infant. Fascinated by the floating cities in the sky before, now she’s desperate for answers.

But a slave isn’t likely to get those answers.

When her abusive Downer family throws her from their hovel, Fear takes refuge with a family who shows her love for the first time. Surely they can’t be trusted. Years of abuse and molestation has taught her that.

Then her brother discovers where she’s hiding and tries to kidnap her. Fear will never let him touch her again. Her new family conceals her at the Fallen, a ranch that hides parachute babies from the Uppers who discarded them.

Just as she’s beginning to embrace yet another home, Fear’s new little sister, Happy, is kidnapped and taken to the Uppers’ temple harem. Fear must go against her namesake, find a working hoverpod, and journey to the dreaded Gliding Lands before the little girl’s innocence is ripped from her forever.

Can she save Happy in time?

And will she find answers to the burning question of why anyone would throw her away?

There is a companion coloring book available. I am not one to color pictures, but if you are, please feel free to click on the “COLORING BOOK” if you are.

The book is well-written and interesting, but will probably only appeal to female readers. I do wish the title character Fear would have been written a little older so that talking about abuse and rape could have been given much more context and greater spotlight.  I recommend parents read this book first to decide if their children are at an age where they are ready for the content and it’s implications.