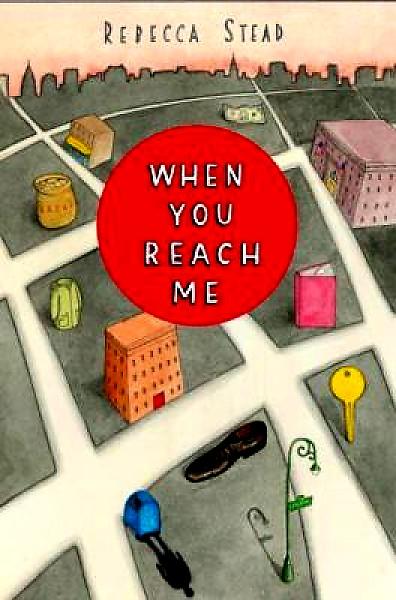 Last month I reviewed a Newbery winner which fascinated me with its intricate puzzle mystery. When You Reach Me is based on another complicated mystery, which, if I tell you the type of puzzle it is at its core, I would ruin the ending for you. So let’s just use the broad genre of science fiction to label it.

Written in 2009 but set in the 1970s, When You Reach Me reads like a vintage novel. Miranda is in sixth grade, lives in New York City, and Sal has been her best friend since before they learned how to talk. But when Sal gets punched by a kid for no apparent reason, he refuses to have anything more to do with Miranda. She’s hurt, but gradually finds some new friends.

Life would be okay, but mysterious things begin to happen. Her hidden emergency key is stolen. A shoe goes missing. And she receives cryptic notes from someone who knows an awful lot about her. The notes leave her thinking that tragedy could be heading her way. By the time she solves the puzzle from the notes, she might be too late to save a friend’s life.

1. Rebecca Stead had my brain whirring with possibilities from page two through the rest of the book until the satisfying final reveal. Does Miranda’s mother get hurt? Why does Miranda never want to remember the last six months of her life?
2. The chapters are titled as if they are topics on The $20,000 Pyramid TV game show, which is a fabulous detail to integrate into the setting, and highly entertaining for me.
3. Through Miranda’s new friendships, the author touches on current issues of the era, and does so in such a manner that young readers learn a great deal of the culture while they are immersed in story.

1. The average reader might get lost with so many clues to follow when none of them make sense. Rebecca Stead gives nothing away until the “veil” is lifted from Miranda’s eyes. And then it ALL makes sense.
2. Some parents may be uncomfortable with Miranda’s living situation. Her mom is single, and Mom’s boyfriend is in their home a lot. The author doesn’t specifically say he spends the night, but he does keep clothes in the apartment. They do plan to marry at the end of the book.

1. Marcus had punched Miranda’s best friend for no apparent reason. Why did she end up being Marcus’s friend?
2. If you had a friend with Annemarie’s health problems, what would you do to be helpful?
3. Miranda didn’t like Julia for a long time. What changed?
4. Is there someone in your class that you don’t like? Do you think you could change the situation for the better?
5. Who is the homeless old man?

Discussion question #5 will inform you if your child understood the story or not. And the answer will give him or her plenty to reflect upon regarding how people treat one another.