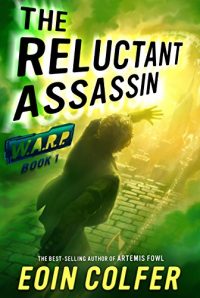 The Reluctant Assassin by Eoin Colfer is a fun science fiction novel with historical elements, and is aimed at young teens and up.

Riley, a teen who is living in Victorian London, is an apprentice to Albert Garrick, a malicious and evil assassin, who misuses his illusionist conjuring skills to gain access to victim’s dwellings. During an assassination attempt, Garrick brings the reluctant and nervous Riley to commit his first murder. Their intended victim however turns out to be a scientist from the future, sent back in time as part of the FBI’s Witness Anonymous Relocation Plan (WARP).

Riley shrinks from his task so Garrick takes over. However, a protective pendant comes to life and transports not only their fatally stabbed victim but also Riley to a time capsule in modern day London via a wormhole. Chevron Savano, a nineteen-year-old FBI agent, who’d had some disastrous operations to her name as well, guards the capsule.

Riley and Chevie must now escape an infuriated Garrick after he also finds his way through the wormhole to modern London. Garrick is not only evil, but also possesses new skills and intelligence as a result of mutations from being transported. He is determined to track Riley and Chevie down to ‘silence them forever’ and gain their timekey so he can return to Victorian London and change the world to his benefit.

I have read many Eoin Colfer books, but most enjoyed his Artemis Fowl series. He has a wicked sense of humour and a gift for engaging action in his stories. This book is the first in the WARP series. Personally, I enjoyed the Artemis Fowl series more than this first book, but am definitely going to carry on, as Colfer is an amazing writer who never disappoints me.