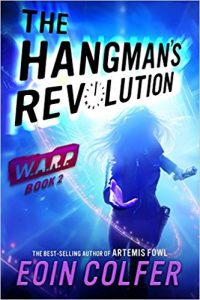 The Hangman’s Revolution is a YA novel aimed at grade seven readers and up, and is the second book in the Warp Series written by the incomparable Eoin Colfer.

At the beginning of the story, seventeen-year-old Chevie lives in the present, a strange world where she is a cadet in the vast army of the Boxite Empire. The dictator of this strange new order is Colonel Box, who has achieved his position by manipulating an FBI program called Warp (Witness Anonymous Relocation Program). The intended use of this program was to relocate witnesses by the FBI to a different historical era using a time tunnel perfected by the genius, Charles Smart. Colonel Box, however, used it to his own advantage by smuggling technology and weapons into the past to dominate the Government, executing millions in the process.

So, returning to Chevie, we see that her position as a cadet is being hampered by voices in her head that tell her something is amiss. Her unpredictable actions and outbursts have been noted and she is brought before the authorities. To prove her devotion to the empire, she is instructed to assassinate the suspected spy, Charles Smart. (He is just getting in the way of Box’s plans) Accompanied by two Thundercats, high-ranking soldiers in the Boxite army, Chevie pays Smart a visit. Things get complicated when Smart suspects something and establishes a time tunnel in his home to escape. But in the process, Smart is shot and the Thundercats and Chevie get sucked into the time tunnel and wind up in 1899 England on Emergence Day.

The above-mentioned present world was started on Emergence Day when Box and his troops, who were armed with future weapons, emerged from their headquarters in the sewer. They executed Queen Victoria and her government, and the rest of the world soon succumbed to Box’s army.

Chevie seeks out her old buddy, a fourteen-year-old magician named Riley, and with their new ally, Otto Malarkey, (a gang leader) they set out against the Thundercats, Colonel Box and their allies to halt the events that lead to Emergence Day and the altering of history.

I thoroughly enjoyed this book. I still think that his previous Artemis Fowl Series is more appealing. Perhaps it is because he concentrated more on the reader getting to know Artemis. But all in all, and rollicking fantasy that will be enjoyed by young and old readers!