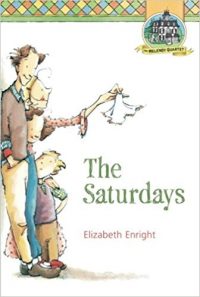 The Saturdays, first book in The Melendy Quartet, is a delightful trot into

yesteryear’s childhood. Elizabeth Enright created a family of four siblings who live an “ordinary” life in New York City, yet their minor escapades become “special” adventures. Set in 1941 before America entered World War II, the Melendy children are a little bored. They decide to pool their allowances so each can afford a solo adventure in the City on Saturday afternoons.

What are the adventures? A visit to an art museum, attending the opera, an afternoon at a beauty salon, and going to the circus. Those excursions might sound dull to this generation, but not in the eyes of these characters. Randy’s visit to the art museum initiates an important friendship. On the way home from the opera, Rush acquires a beloved pet—who later saves their lives. The new hairstyle and manicure is a fleeting thrill teaching Mona the meaning of “someday.” And the trek to the circus proves to Oliver that Father’s training pays off in an emergency. Other simple incidents in their lives bring either catastrophes or blessings.

Kids won’t read about trips to the mall or the latest Xbox game. For people who are sold on the society of today, they would wilt in boredom if forced to read a chapter about a ten-year-old who discovers an elderly acquaintance had been captured by gypsies in her youth.

If we sense our children are becoming jaded by our texting-social media-video game society, force them to imagine themselves in the Melendy’s moments. As proof that many kids will like what they read, my own experiences in sharing with my students serves as an example.

My growing-up years were well past the Melendy clan, but my brothers and I enjoyed simple adventures of our own. We walked along a highway to reach the ice cream store. We spent entire afternoons in the woods. We biked to the pool and to the movies. We played kickball in the street.

My students were jealous! “You could just go off and not come home for hours?” “They let you walk on roads with no sidewalks? Alone?” “Weren’t they afraid you’d get lost?” “Wouldn’t you get run over?” “How old were you when they let you do that?”

My answers: “Our parents taught us to walk on the left shoulder facing traffic. We packed a lunch and came home in time for dinner. We never got lost. When a car approached during the game, we ran to the side until it passed. I was nine. My brothers were younger.”

If those students thought adventures on their own would be fantastic, your kids will enjoy The Saturdays.