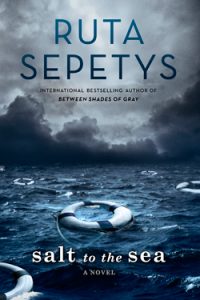 The Importance of This Story

This novel brings to life the plight of millions of citizens of Poland, Lithuania, and Prussia (a country that no longer exists), who were victims of both Nazi and Russian brutality during World War II. Descriptions of the horrors these people endured or succumbed to were sometimes hard to read, yet I wanted to learn more about this lesser known part of the war’s history.

Characterization, the Feature I Value Most

The characters become acquainted with one another while trying to escape both the Communist Russians and the Nazis. Talk about being caught in the middle! The characters’ goal is to reach a ship on the Baltic Sea coast that will take them to safety. On the way, they demonstrate their tendencies toward self-sacrifice or self-absorption. I don’t recall profanity used as a crutch for characterization.

These fictional characters are so very human within a real historical event that I didn’t mind the story being told from many points of view. And I rarely enjoy a novel with more than one or two points of view, which I feel is usually all that is necessary.

I don’t consider this a YA novel, as it is promoted. Because of the maturity of the main characters and the more adult content, I’d label it New Adult. Only one of the main characters appears to be a teen. The rest are twentyish or at least older than the protagonist in most YA, and the two that carry the story (IMO) are the nurse and the mysterious soldier. Teens may be disappointed in it (or shocked) unless they love history and don’t mind the seriousness and brutality in the story. However, I recommend it to emotionally mature teens over the age of 14 who might be interested. This novel could be called a coming-of-age story in the most extreme sense of the term.

Cynthia T. Toney has a passion for rescuing dogs from animal shelters and encourages others to save a life by adopting a shelter pet. In her spare time, when she’s not cooking Cajun or Italian food, Cynthia grows herbs and makes silk accent pillows. If you make her angry, she will throw one at you. A pillow, not an herb. Well, maybe both. She is the author of 8 Notes to a Nobody, 10 Steps to Girlfriend Status, and 6 Dates to Disaster. Find out more at www.cynthiattoney.com.