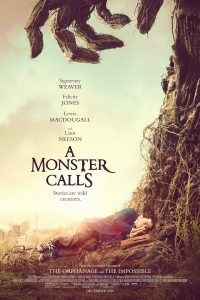 A Monster Calls by Patrick Ness is a bittersweet teen fiction about a boy struggling to come to terms with his mother’s serious illness.

Connor, a twelve-year-old-boy, is faced with unbelievable stress – a dying mother, a father who has split from the family, a recurrent nightmare, a domineering grandmother, and bullies at school. Then, a monster visits. But this monster, which Connor initially believes is just a dream, insists that Connor “called” him. Between dealing with the above problems, Connor must listen to the monster’s stories that urges him to confront his anger, confusion, and frustrations. And at the end of the monster’s three tales, Connor is forced to reciprocate by describing his nightmare – a story of truth, and the root of his depression and anxiety.

When I picked up A Monster Calls to read, I was surprised to see it was coming out as a movie, with big names involved, like Liam Neeson and Sigourney Weaver. I quickly fell in love with the style and the content. I enjoy reading a book that has heavy symbolism and this didn’t disappoint. The story is based upon an idea of writer Siobhan Dowd, who has written four other amazing Young Adult novels. Tragically, this would have been her fifth, if she too hadn’t been taken too early by cancer. Patrick Ness, the author, has been passed the literary baton, and he ran with it, creating a powerful and provocative piece of work. In his words, he challenges other writers to “…go. Run with it. Make Trouble.”

One Reply to “A Monster Calls by Patrick Ness”