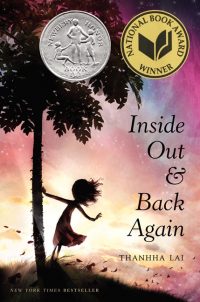 Inside Out and Back Again is the second free verse middle grade novel that I’ve read and enjoyed recently. Perhaps, that’s because it’s the 2011 winner of the National Book Award for Young People’s Literature and a Newbery Honor Book for 2012.

The subject matter is also close to my heart: the plight of the Vietnamese refugees following the fall of Saigon in 1975. Using her own life story, Thanhha Lai creates a fictional version of ten-year-old Ha who leaves Saigon under siege, lives in a refugee camp for months, and arrives in Alabama to start her new life in America.

The story opens in Vietnam where Ha’s father disappeared years ago, presumably captured by the North Vietnamese. Her mother works hard to feed and clothe Ha and her three older brothers. While I ached for the family’s struggles as they prepared to flee Vietnam, the story really caught my interest as they tried to adjust to a different culture. Ha can’t speak the language, she doesn’t like being treated like a small child since she can’t read at her grade level, and spelling in English makes no sense at all. I’m sure many of you agree! Some of the children in her class bully her, but a few are kind and reach out in friendship. As their first year in America unfolds, Ha depends on her brothers and her English tutor to survive in school. With each passing month, she gains a little more confidence and a few more insights into her new country.

I’ll leave you with a fun aside. Name pronunciation always fascinates me. I assumed Thanhha Lai was pronounced Tonna Lie. Wrong. Teachingbooks.net has an audio of Thanhha Lai describing how to pronounce her name.  The closest I can describe it: Tang (voice rises) Ha (voice descends) Lie.