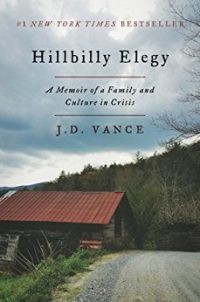 Print
Our Score
Hillbilly Elegy is the biography of man raised in poverty who overcame adversity to graduate from Yale law school.

J.D. Vance is the grandchild of hillbillies from Kentucky who emigrated to Ohio with the promise of good jobs in a steel mill. He was raised by a single mother with addictions and a string of failed relationships. A feisty grandmother kept J.D. from being a statistic of working class white families throughout our country. Instead of ending up in a cycle of poverty, addiction, and abusive relationships, J.D. is a success story. He deferred a college education to enlist in the Marine Corps and graduated from Ohio State in 2.5 years while working sometimes three jobs. He entered the Ivy League as a Yale law student. Now equipped with a good job and happily married to a Yale law classmate, J.D. is an inspiration and mentor to future generations of at risk youth. Hillbilly Elegy is his story.

In conclusion, I would recommend Hillbilly Elegy to adults and mature teens. This is not a book to read for entertainment’s sake, but one to offer insight into the problems plaguing the working class in America. Most of all, there’s a hopelessness and desperation in this community as well as broken families, addiction, a cycle of poverty, and waning opportunities.

This was a deeply personal book for me. I went through most of my life oblivious to those suffering around me. As a result, It’s not often  a book sucker punches me with such self-awareness.

The first day of my professional life began in J.D.’s hometown (Middletown, OH). My trainer described himself as “a Tennessee Ridge Runner” (i.e. hillbilly from Tennessee). I reflected on that time. Did J.D. walk by me? A faceless tween in the public library. At the time, I didn’t care about students in a crumbling steel town. My goal to learn what I needed and move onward and upward in the company.

Before then, I was raised in a city not too different from Middletown, OH, I was a middle class kid surrounded by working class peers. I think back to my school days and wonder which of my classmates grew up like J.D. I’m sure some went to bed hungry. Some likely hid from abusive parents. Or played grownup because their parents were addicts or absent. As a student, I was long on ambition and low on empathy.

As an adult, I’m can see how privileged we are and try to pass that insight onto my children. I want to help those in my community who I think might have it a bit harder than the rest. After reading this, I’m even more inspired to look for ways to mentor the J.D.s of this generation.