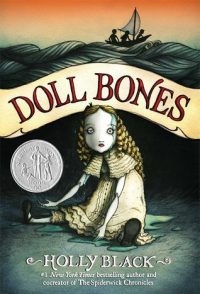 Doll Bones by Holly Black is a dark Middle Grade mystery most suited to fifth grade and up.  While Doll Bones won a Newberry Honor Award, it is creepy, deals with the occult, and therefore may not be suitable for all children.

Zach, Poppy and Alice have been friends for ever. They love playing with their action figure toys, imagining a magical world of adventure and heroism. But disaster strikes when, without warning, Zach’s father throws out all his toys, declaring he’s too old for them. Zach is furious, confused and embarrassed, deciding that the only way to cope is to stop playing . . . and stop being friends with Poppy and Alice. But one night the girls pay Zach a visit, and tell him about a series of mysterious occurrences. Poppy swears that she is now being haunted by a china doll – who claims that it is made from the ground-up bones of a murdered girl. They must return the doll to where the girl lived, and bury it. Otherwise the three children will be cursed for eternity . . .

Ultimately, my concern with the novel is its tendency to normalize and/or promote the occult. That doesn’t mean that kids shouldn’t read it, but if they DO read it, please discuss the dangers of dabbling in the occult with them. (See discussion questions).